The Accordren youth group was out spreading Christmas cheer at two locations yesterday – in front of Lokal and then at Sal’s. Our group attracted a variety of onlookers of different ages; from curious toddlers to reminiscing seniors whose first instrument was the accordion.
L-R: Sonara, Gianna, Michael, and Jim Rice (for support) The Russian Music Ensemble from the College of William and Mary was a big hit that kicked off their concert series last night at the Ewell Recital Hall on campus. It was the Ensemble’s first performance conducted by Ms. Ina Yakubeika who also conducts our Accordion Renaissance Ensemble. At the end of the stellar performance, she was presented with lovely flower bouquets by both ensembles for her hard work and dedication.

Nestor Fester, rain or shine, this Oktoberfest ran just as fine!  Accordion Renaissance hosted a private gala Oktoberfest 2:30 to 5pm on Sunday, Oct. 20th at the Mercury Entertainment Center.  Music was  provided by the ACCA Shriner’s Sauerkrauts German Band.  Local accordionists played during the reception and intermission.  Fun and entertainment were had by all! 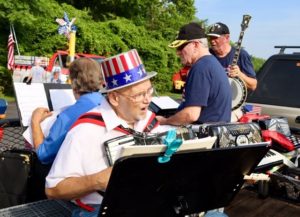 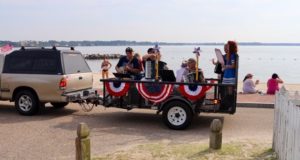 It was a GRAND OL’ Day for a Yorktown parade! Members of the Accordion Renaissance Ensemble and Banjo Jack gleefully strutted their patriotic tunes with pride. We thank Miles and Ruth for joining us with humor and open arms. Happy 4th of July, everyone! Sonora and Ysabella culminated the accordion portion of the recital with the duet “Apple, Peaches, Pumpkin Pie Polka.”  Each musician received an audience round of applause and a WAMT pin following their performance.

The students and teacher were all smiles knowing that all they can eat pizza and salad was waiting for them at Sal’s by Victor Restaurant.
Yum! Did you know that Accordion Renaissance gave out scholarships? Did you know that Accordion Renaissance offers training for young musicians?